The sun is still holding out, even as September fades away (where on earth did the last month go?) and the red and yellow tints appearing in the trees are reminding me that the cold weather is on its way… so once again I felt I had to make the most of the glorious sunshine today. I got out my maps and was poring over them before I’d even got out of bed this morning and decided to go for Cunswick Tarn a little to the west of Kendal, only just inside the National Park boundary. At the last minute Ben decided to come with me and we set off in the sunshine.

We parked in a layby just beyond Plumgarth’s café (I’ll bet they do the best bacon sandwiches ever) and had to walk up the road a little way to find the footpath. It went through some woodland and then come out onto a hilltop with a  steep cliff falling away to our right into the woods. We walked along the top of the cliff for a while (Ben trying to scout out possible climbs) and trying to work out where the tarn was. Although I knew roughly where it was it was completely hidden by the trees. After a while the path turned to the right and we walked down through the woods, enjoying the quiet and the dappled light falling through the trees. As we got further down however, the quiet was broken by the loud quacking of what sounded like rather a lot of ducks – and we knew we must be close.

The trees hid the tarn until almost the last moment, growing right up to the edge of the water but once we got close it was a beautiful sight. It’s a smallish tarn, but big enough for a good swim and surrounded by trees and reeds. There was also a little hide, presumably for shooting ducks, which made it feel a little less idyllic. I decided to to just get in where the path met the edge of the tarn, so I stripped to my bikini while Ben climbed a tree. I gave him my camera to take some photos of me swimming and once I was in he threw it down to me. I’d decided to go without my wetsuit having enjoyed being without it so much in Little Langdale Tarn on Monday so it felt chilly getting in, although not as cold as Little Langdale had been. The edge was very silty and thick with dead tree branches which made it hard to get in at first as they kept breaking and dropping me down into the squelch. It got easier as I got further in and after a few minutes I managed to get used to the temperature and started to really enjoy my swim. There were loads of ducks, around the edge of the tarn and flying over it, the sun was shining, the water was clear and there were dragonflies near the bank. The water was a lovely temperature once I’d got used to it and I felt very peaceful and happy. Ben was making his way round the side of the tarn and after a few minutes I heard a crash of splintering wood. I called over to ask if he was breaking things and a small voice replied ‘No – I fell over’. There was a pause and then a slightly more aggrieved voice said ‘I’m fine though’. A few minutes later I saw him for the first time since I’d started swimming properly, climbing another tree.

I had my goggles with me, so I tried ducking my head under the water but although it was pretty clear it was so cold that I didn’t want to do it too much! I swam back to the point where I’d got in and clambered out over the silty, branch-strewn edge. I was quite glad that Ben hadn’t got back yet so he missed seeing me, bum in the air, on hands and feet trying to navigate my way over the sludge by balancing on one dead branch after another, occasionally plunging into the murk as one of them broke.

It was nice not to feel too cold as I got out and we walked back to the car gathering blackberries. 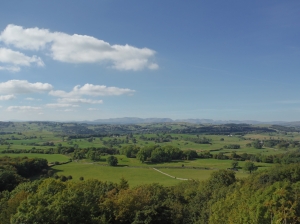 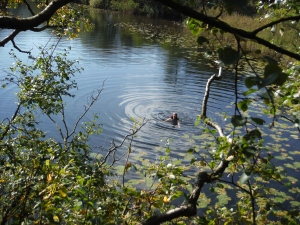 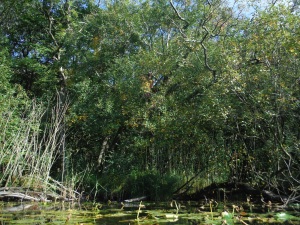 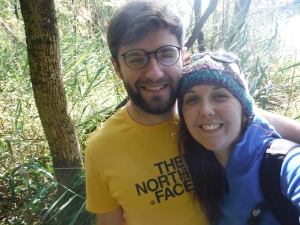