Another fantastic day today. I was a bit nervous about doing Wastwater because it’s a big one and I’m rather out of practice at the moment. But I decided to go for it and I’m so glad I did. I met Torben at the youth hostel which is right on the shore of the lake. He offered to come in a canoe which made me feel much more confident. We decided that the best way would be to paddle across together in the canoe and then I would get out on the far side and swim back while Torben paddled.

We gathered all out kit together and got out a canoe. I put on my swimming stuff and my wetsuit, but I wasn’t sure whether or not to wear the wetsuit for the swim. I’ve loved swimming without it so much recently and it’s such a different experience. My wetsuit also makes me less flexible which makes swimming harder work. On the other hand, Wastwater is the deepest lake in the Lake District and it’s cold. I had my tow-float and Torben in a support boat but still, I didn’t want to get into trouble pointlessly. In the end I decided to wear my wetsuit in the canoe on the way over and decide when I got there, but also to let Archibald trail behind so I would know the temperature of the water before I made my decision.

We got the canoe into the water and loaded it with eveything we thought necessary – I put in my tow float with goggles and whistle attached just in case, camera and float and my rubber duck for gauging the temperature of the water. Torben put in 2 buoyancy aids, a towel, wetsuit, paddles and a pot of tea with mug. We were well prepared.

The journey across the lake was pretty easy and the views were stunning. Wastwater is so dramatic, with huge scree slopes running right down into the water. It wasn’t too windy and the sun was peeping in and out of the clouds.

As we went I was checking the temperature of the water to see what it was like in the middle where it would be coldest. Archibald registered 17 degrees for the first half and 16 for the second half. This made it really hard for me to decide about the wetsuit. On the one hand it was a couple of degrees warmer than Stickle Tarn two days ago but on the other hand this was a lot further. Torben wasn’t keen for me to go without the wetsuit and I could totally understand why, but in the end my desire to be properly immersed in the water won over. I took the wetsuit off and got ready to swim across England’s deepest lake in only a swimming costume.

Torben changed into his wetsuit (‘Just in case you tip me out’) and had a cup of tea while I psyched myself up to get into the water. 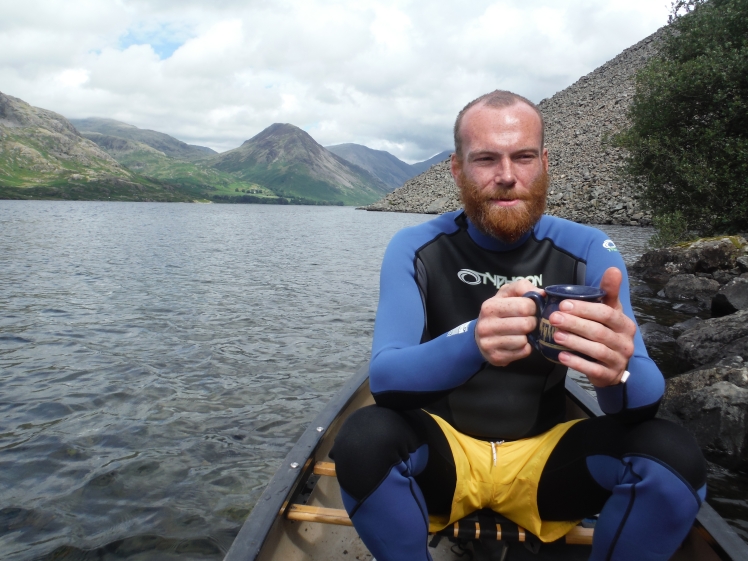 I kept my wet boots on and was glad I had as it was very stoney getting in. And after all the worry about it being cold it really wasn’t too bad at all. I managed to get in fairly quickly (by my standards!)

Once I started swimming I felt fine. It was so good to be doing a bigger swim, the water was crystal clear and the surrounding fells were breath-taking. Unfortunately, the wind chose exactly that moment to pick up which was annoying for both of us, Torben battling to keep the canoe straight against the wind and me with waves being constantly slapped into my face. When your head is so low in the water it doesn’t take much of a wave to be irritating!

As I swam, Torben was paddling around and it did make me feel better to know that he was there, but once I got going I felt pretty confident in my ability to do this. The only problem was the wind. I’d decided to do a diagonal route across to the hostel and even though I always felt like I was heading directly for the little beach, every time I looked back I could see that I was still almost in line with where I’d started. The wind was blowing towards the opposite end of the lake and I was obviously being blown slightly off course without even realising it. Possibly the tow-float made the wind have more of an effect as well. Torben was also being affected – if he stopped paddling for a moment he would rapidly start heading down the lake.

I ended up swimming almost straight across and then having to swim parallel to the bank in order to get back to the hostel. I have to admit I did start to feel a bit cold towards the end (Archibald registered 16 degrees the whole time) but never worryingly so. It took me about 35 minutes to get across which I though wasn’t bad for a slow swimmer competing with the wind! 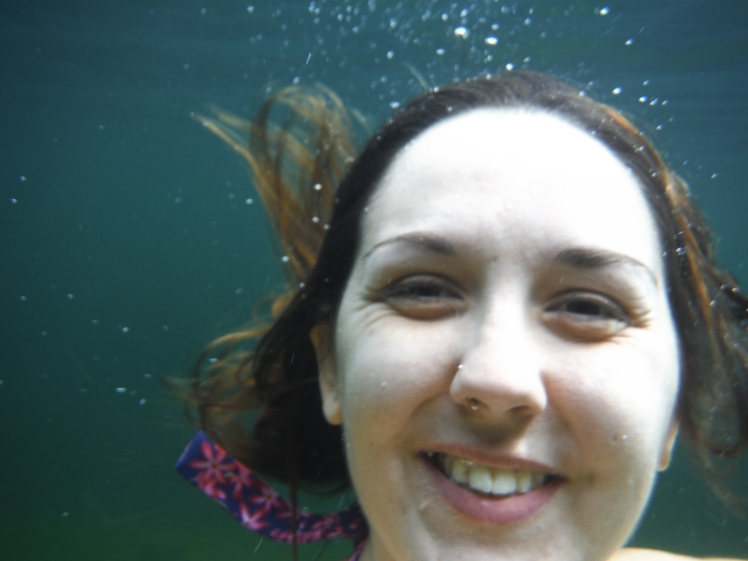 I was pretty shivery when I got out but I had my towel ready to wrap round me and sat and watched while Torben went for a quick swim with Geoff, the hostel dog looking on.

Yet another fantastic day and I’m starting to feel like I’m getting back into the swing of things. Wastwater is a beautiful place to swim and I would recommend it to anybody.