After two boring but sleep-deprived days at work it felt great yesterday to be able to throw myself into a good long swim. I left work and drove down the M6, only to find a solid mass of traffic at my junction. From there on the fact that it was the Friday of a bank holiday weekend in the Lakes was very evident! I finally got to Glencoyne car park and met up with everyone else. We sat on the beach and discussed the plan and then headed back to the car park for the awkward task of trying to get changed under a towel in a busy place. There were nine of us altogether which was amazing, so many people! Tess, Amy and Natasha swam with me, Amy and Lindsey had their kayaks to be support boats and Aaron, Laura and Josie were all there for moral support. 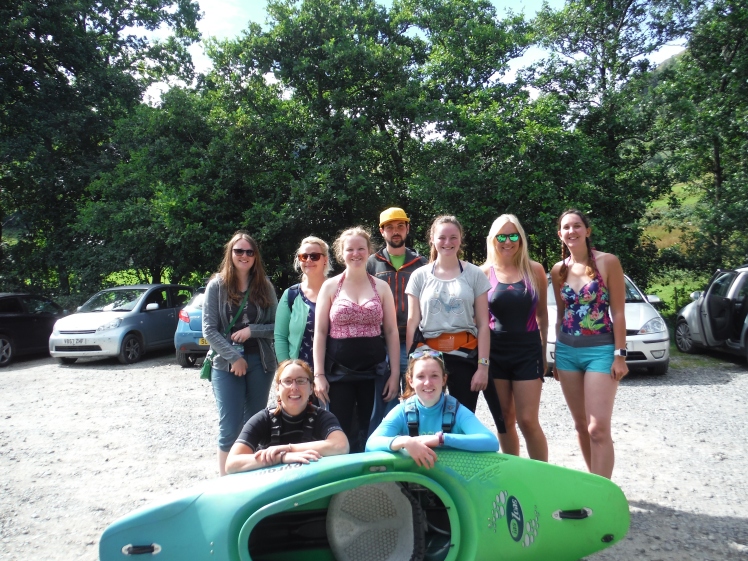 Once we were ready I drove the swimmers up to Patterdale and we walked along the far shore of Ullswater to get to the spot I wanted to swim from, while Amy and Lindsey paddled across from Glencoyne to meet us. It was a nice walk, the sun going in and out of the clouds but more out than in. At one point a tree had fallen across the path (presumably a result of windy days earlier this week) which made for an interesting scramble through!

I’d seen the place where I wanted to get in on a walk in February so I’d slightly mis-remembered the distance and it took a while to get there but it was a nice walk and the views across the lake are so stunning. There were lots of little sailing boats out on the water and various people walking, swimming, picnicking and kayaking. We must’ve looked a bit odd in our swimming costumes, wetsuits and sandals but I’m used to that by now! 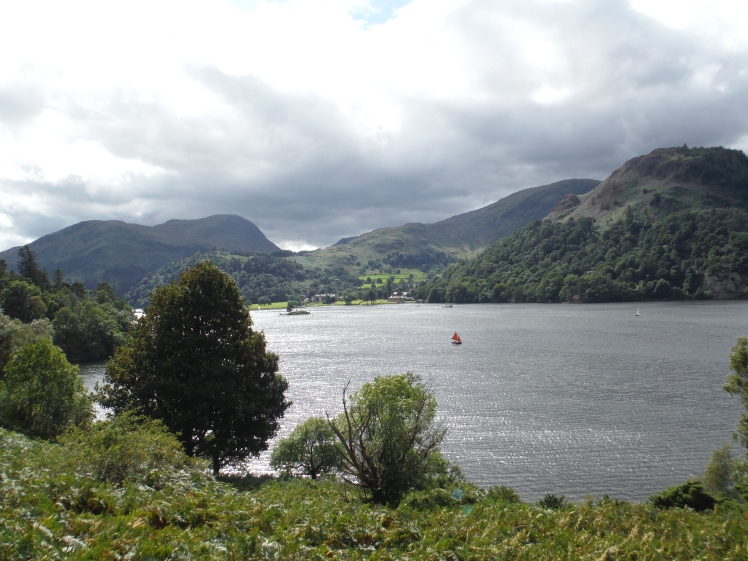 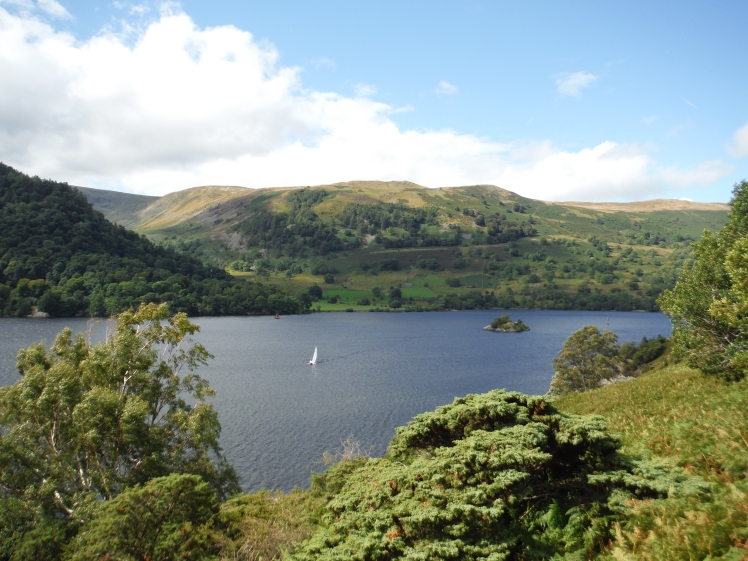 We got to the little beach I wanted to swim from and Amy and Lindsey were there waiting for us in their kayaks. Amy told us that she was very prepared – she had a sling on the back of her kayak that we could hold onto, another tow-line with her in case it was needed, a bottle of squash and, most important of all, a bag of jelly babies in her buoyancy aid!

The two kayakers kindly agreed to take our shoes in their boats and once they were stowed we started to make our way into the water. I’d been a bit worried that it would be freezing  – it’s a big lake and there was some pretty heavy rain at the weekend – but luckily it wasn’t too bad. The worst thing was that the stones were very slippy and painful to walk over, so it took us a little while to get in, but we made it in the end and set off towards Norfolk Island. 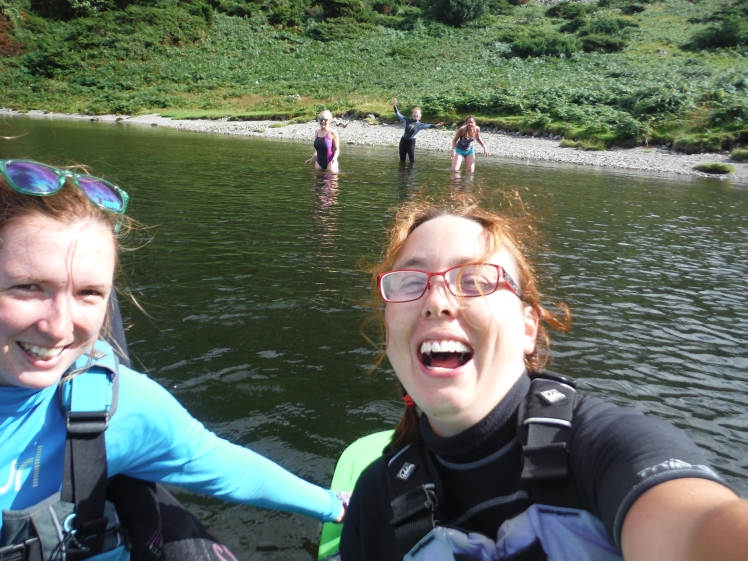 We started out on the edge of a little spit that sticks out into the lake, so for the first few minutes we were nicely sheltered, but as we came out from behind it the wind really started to make itself known. The water became much choppier, waves being blown into our faces as we swam facing directly into the wind. Lindsey had my camera but was struggling to take photos because by time she’d got the camera out and turned it on she’d usually been blown far away from the person she was trying to photograph. Amy did make her way around us all to feed us jelly babies, but it was quite difficult to chew, avoid waves to the face, swim and breathe all at the same time! 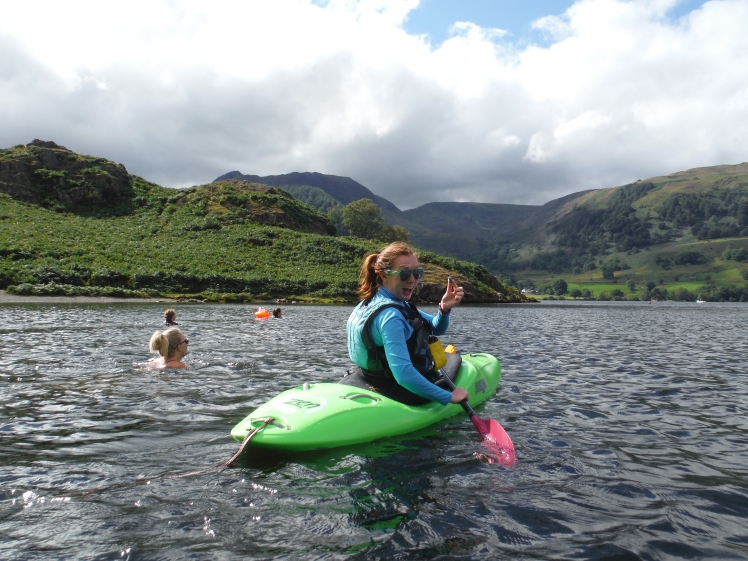 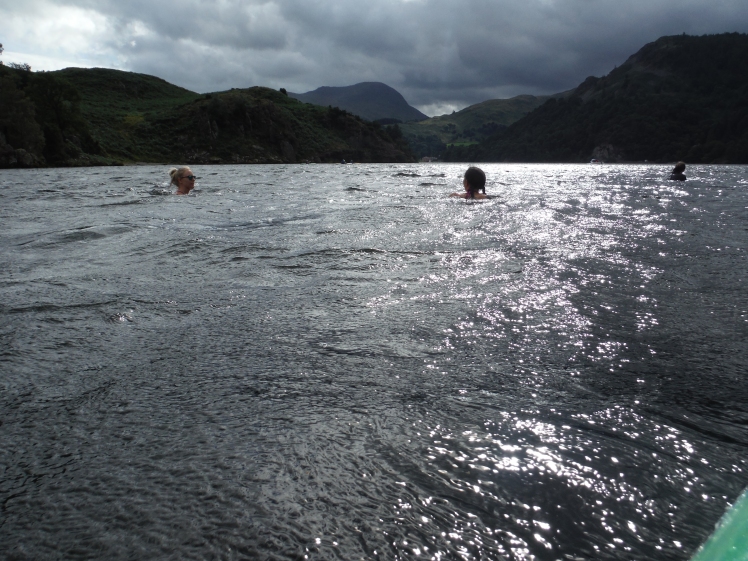 It felt like hard work to swim to the island and it was a relief when we got there and had a rest on some outlying rocks. The water around the rocks was just shallow enough to stand in, but the bottom was covered with some sort of mossy plant which felt very weird to stand on, sort of spongy and strange. We didn’t really want to get out of the water as we thought we’d get too cold, so we resisted the temptation to do mermaid impressions on the rocks and made do with another jelly baby each before setting off towards Glencoyne beach. We were swimming at a different angle now and the wind was at our backs which made it so much easier! It didn’t feel like such hard work and we made much quicker progress. 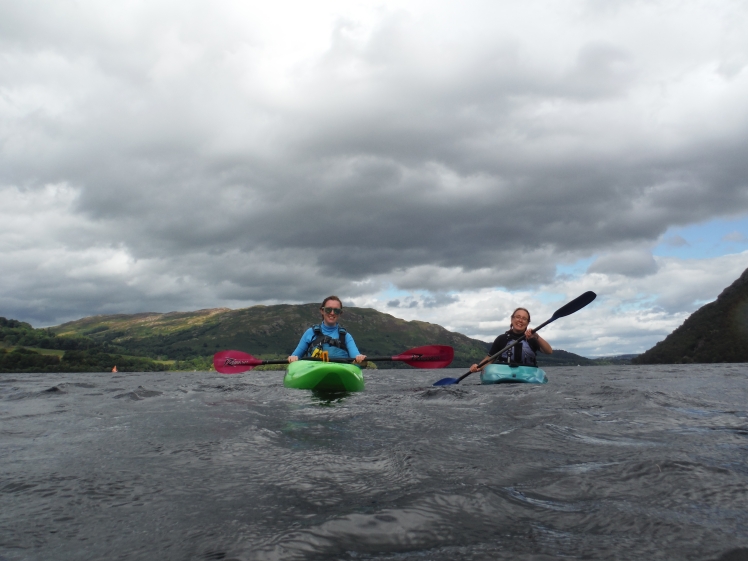 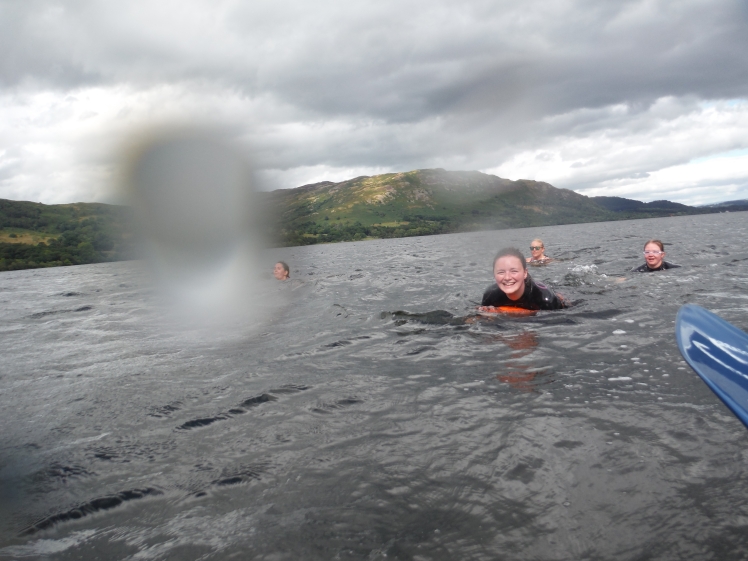 As we got closer to Glencoyne we spied Aaron, Laura and Josie on the beach waiting for us. Lindsey had charge of Archibald, trailing him alongside her kayak and as we’d set off the water temperature had been 17 degrees but it had soon dropped to 16 and by the time we were nearing the end of the swim I think we were all starting to feel the cold, especially Natasha and me as we didn’t have wetsuits. The supporters on the bank cheered us as we got to the beach and, once the underwater selfies had been taken we climbed out, tired but pleased. We’d been in the water about an hour and 10 minutes, meaning this was one of the longest swims I’ve done so far. 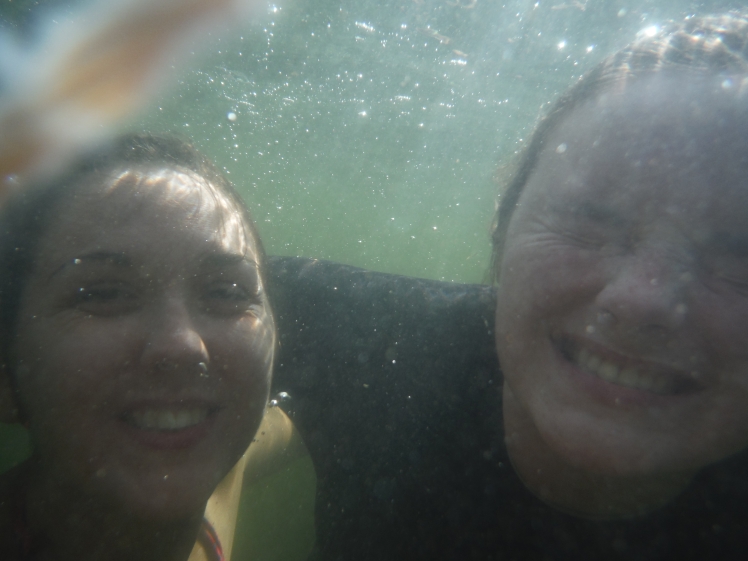 It was a lovely day, despite the wind and the fact that the sun hid behind a big cloud most of the time we were swimming! It was so nice to have so many people with me, I really love sharing these swims with other people. What a wonderful group of people to have with me to do one of the biggest lakes. And, of course, yet again, what a stunning place to swim. I feel very lucky to be able to this challenge, I’m still loving it more and more! 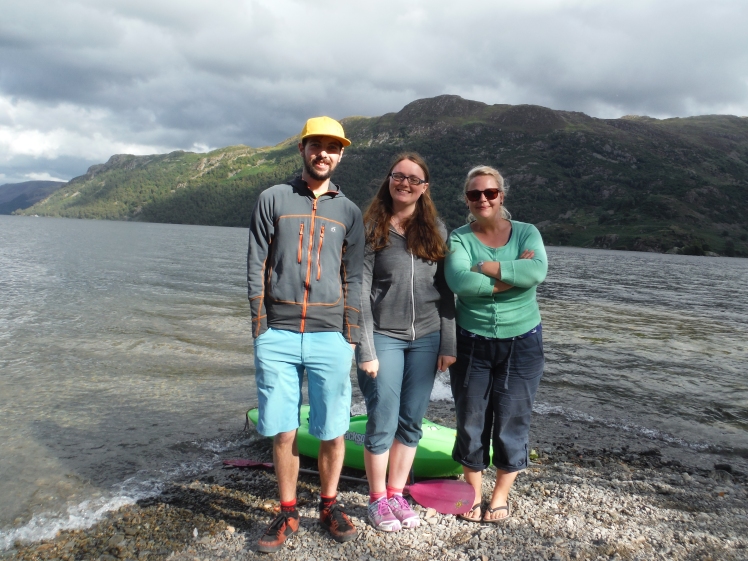 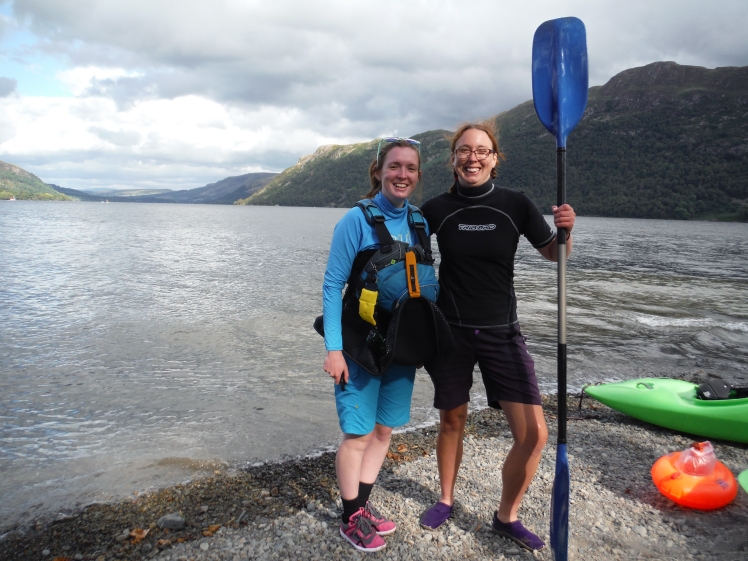